His Grace Bishop Maxim (Vasiljevic), PhD, was consecrated a bishop on July 18, 2004 and enthroned Bishop of the Western American Diocese on July 30, 2006 after being elected to the position by the regular assembly of Serbian Orthodox bishops in 2006. His cathedral is St. Steven’s Serbian Orthodox Cathedral in Alhambra, California, but he regularly visits all of the parishes and monasteries of the geographically-vast diocese. The son of a priest, Bishop Maxim dedicated his life to repentance at Tvrdos Monastery in Herzegovina when he was in his early twenties; there, in a monastery inheriting the Nemanjić gift of hospitality passed on by St. Symeon and St. Sava, he was tonsured with the name Maxim after St. Maximus the Confessor by Bishop Atanasije (Jevtic) (one of four bishops who were spiritual children of St. Justin Popović), who also later ordained him deacon and presbyter.

Speaking five languages (English, Serbian, Greek, Russian, and French), he studied widely, graduating from the Belgrade Faculty of Orthodox Theology in 1993 before earning a Masters of Theology (1996) and PhD in Dogmatics and Patristics (1999) from the University of Athens. While sojourning in Paris from 2003-2004, he studied Byzantine History and Hagiography as a post-doctorate at the Sorbonne while also receiving training in the theory and practical application of painting at the French Academy of Fine Arts. He is professor of Patristics at the Belgrade Faculty of Orthodox Theology, Coordinator for Committees of the Secretary of the Assembly of Bishops, founder of Sebastian Press, author of many scholarly theological articles and books, and frequent presenter at important theological conferences. His love for and commitment to Christ, his thorough education and broad experience of the Church, and his monastic tonsure into the life of obedience have prepared him to help transplant the ancient and future Christian faith from the seedbed of traditional Christian lands to Western America.

The bishop is the final authority for each parish in the diocese, but the bishop ordains presbyters (priests) in order to serve the Divine Services and administer the Holy Mysteries, pastor the people, and oversee and be responsible for the day-to-day necessities of each parish. 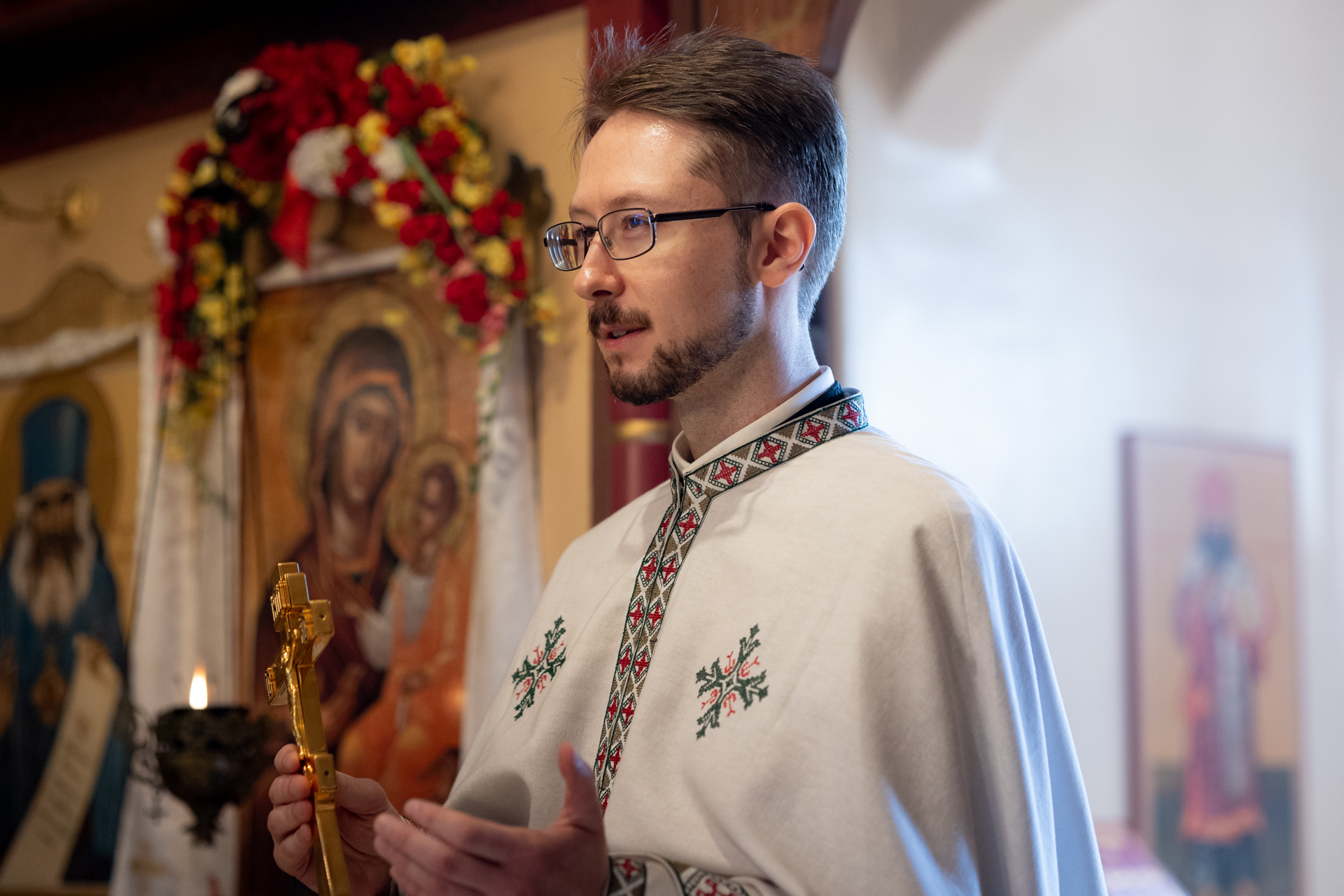 Fr. John Suvak graduated with a M.A. degree in Theology from Marquette University’s Klingler College of Arts & Sciences in 2015.

After years of living the Christian life, V. Rev. Protodeacon Stephen found solace in these words about Hieromonk Seraphim (Rose) (+1982): “Before he found the Truth, he had suffered for the lack of it; now having found it, he suffered for the sake of it.” Life is not about avoiding suffering, but choosing for Whom one will suffer.

Born and raised in Seattle to a father who was a technical writer for Boeing and a vivacious peace-activist mother originally from Little Italy, Stephen Dyer graduated from Nathan Hale High School (Seattle) in 1970 and attended North Seattle Community College for two terms. Yet he was restless and wanted purpose, meaning, and nourishment for his soul; although this would eventually be fulfilled by Christ in the Orthodox Church, his path was initially through Buddhism, Transcendental Meditation, and the Holy Order of MANS, which he learned about from a friend before joining in 1971.

Protodeacon Stephen recalls, “I was living in a spiritual vacuum and wanted a purpose beyond material success.” His involvement with the Order, with its emphasis on Christ, initially satisfied his desire for purpose. It also had him steadily move from city to city; it would be twenty years before he finally lay down roots in a spiritual home.

From Seattle, he moved to Portland where for six months he was part of the initial community that would, decades later, become the Holy Apostles Orthodox Church (now in Vancouver). He moved to San Francisco where he worked as a driver for six months before moving to a farm in Sebastopol where he worked in the city while also doing farm chores. A brief return to San Francisco predated a move to Cincinnati in 1972. He spent three formative years there, working as a janitor in a Catholic Good Samaritan Hospital, which “took me from the deepest basement up to the psyche ward and everywhere in between. I met everyone.” He was invited back to San Francisco for a year in order to attend night classes for minister training. Then he went to Detroit for two years (1976-1978), working drug and alcohol ministry in Cass Corridor, a sketchy neighborhood deep in Detroit’s inner city. There, he says, “I learned about human nature.” He saw people at their worst: “drug addicts, alcoholics, criminals…the illusion of nicety that people often project was stripped away. I would call it a war zone experience. I was a burned-out wreck after two years [. . .] People were positively influenced there, but it is hard to make changes because you are dealing with generational poverty and addiction. “Talk about fools going where angels fear to tread. Detroit was the heroin and murder capital of the country at the time.” Next it was to Indianapolis, where he lived from 1978-1983. While he was there, in 1981, he and his future wife, Irene, who was then living in St. Louis, met.

Whereas Irene would move to Denver to join the Immaculate Heart Sisters and contemplate being a nun, Stephen returned to Detroit and joined the Brown Brothers of the Holy Light, which – like the Immaculate Heart Sisters – was a suborder of the Holy Order of MANS. In Detroit, the brothers ran a tofu company, Abby Hearth Tofu. Stephen had a powerful experience with the brotherhood’s prayer and community life, in the midst of which, in 1984, he was introduced to Orthodox Christianity: “It was the fulfillment of the Christianity I had experienced up until that time.” That same year, the brothers sold the house in Detroit and moved to Massachusetts: first Buzzards Bay and then Boston. It was in Massachusetts that he learned carpentry as a trade.

In 1986, Stephen moved to Seattle to be with his mother and brother while his brother Geoffrey was dying. In November, he moved to Portland and rejoined the Holy Apostles Community, by this time an Orthodox Mission. Irene had already moved to Portland to teach. He was baptized at Church of the Annunciation in 1989 and ordained a reader there in 1989. He contributed his growing carpentry skills to Church of the Annunciation when the community purchased an old Protestant wooden church, moved it a mile-and-a-half to its present location, and then renovated it from 1986 to 1989. After the Annunciation job completed, he worked for other people doing carpentry.

He and Irene were married on August 21, 1988. Both desired to be more involved in a mission from the ground up. When V. Rev. Archpriest Nicholas Letten of Holy Apostles told Stephen that Fr. David Lubliner would be starting a mission in Eugene, the couple visited Eugene, found it a nice place, and Stephen sent out resumes. He was hired by Temple Construction and the Dyers moved down to Eugene from Portland with their son on May 1st. The Dyers would eventually raise three children in Eugene. Within a year, Stephen started his own business in Eugene (Dyer Remodeling). Later, he developed an expertise installing skylights and produced the Eugene-Springfield area’s foremost skylight business (Dyer Skylights). Being a self-employed contractor, he made his own hours in order to help with the Eugene mission and be available for services on Saturday night, Sunday, and Feast days. The Dyers and the Lubliners were the original two families from which the St. John the Wonderworker Church began.

He was ordained deacon on February 3, 1996 in the St. Paul the Apostle Mission in Eugene. He was elevated to the rank of protodeacon by His Grace Bishop Maxim at St. John the Wonderworker on October 31, 2015. He has assisted the Eugene church over the years both pastorally and professionally, serving as the general contractor for the initial renovation of 304 Blair Boulevard from 1997 to 2000 and then again for the 2015-2016 remodel, all the while buoyed by knowledge of He Whom he serves.